Dr. Greenstein specializes in functional medicine and uses it to treat a variety of health problems. It’s a science-based, logical and natural way to become healthy again. Functional medicine treats individuals who may have multiple bodily symptoms, imbalances and dysfunctions caused by altered physiology (function) instead of looking at and treating health problems as isolated diseases/illnesses. 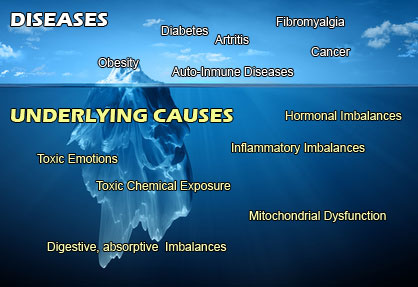 As the graphic with the iceberg illustrates, a named disease such as diabetes, heart disease and fibromyalgia might be visible above the surface (tip of the iceberg), but according to functional medicine, the cause lies in the altered physiology below the surface. Almost always, the cause of the disease and its symptoms is an underlying dysfunction and/or imbalance of bodily systems.

Dr. Greenstein is one of the few functional medicine practitioners in Fort Lauderdale. He uses a combination of natural agents such as professional grade nutritional supplements along with dietary and lifestyle changes, and counseling. Every program is specifically designed to meet the needs of the patient.

The world was first introduced to functional medicine by a clinical lecture on functional medicine delivered by Willoughby Wade, M.D. on March 5, 1870. Dr. Wade’s lecture was published in the Lancet Medical Journal on July 1, 1871. Dr. Wade was way ahead of his time as a healthcare visionary and forward thinker.

Some of the concepts mentioned in his lecture included: